Was planning on going out with Chris again today.  He called at 8:30am and told me he was a no go due to his knee aching.  He over did the day before.  I was also sore and contemplated staying home and resting.  I sat n the recliner for a bit.  I checked the weather and saw Sunday and Monday were going to be good for fishing.  I got dressed and decided to hit an easy close stretch.  As I drove north I thought about alternative places in case my close pick was taken.  Three of my close places were taken.

I had procured some new permission in December about 30 minutes away.  No one was on the stretch.  I was on the water by 11am.  Was partly cloudy and water clarity was good.  Was 34 degrees when I began.  It got up to 39 in the middle.  I had to unbutton my coat.  Later in the outing the wind picked up and I closed the coat.

The first short stretch was open pasture.  It was old permission.  I scored three right away.  I was excited about the adjoining stretch and zoomed through the open pasture. The other side of the fence there were tall brown weeds and greasy banks. 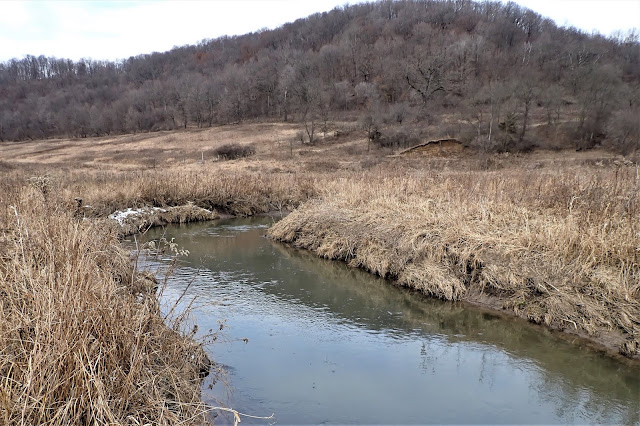 When I see a nice bend, I typically take a photo prior to fishing it.  This bend had a spring "Thermal" feeding in about half way up the curve on the left.  I banged 11 browns out of this hole.  Most were small.  One of the first casts I rolled a big fish.  I was angry at all the littles getting in the way and spooking the big dog that rolled.

None of the fish caught in this hole were in the fast water.  I walked up to the 90 degree turn and dropped a short cast on the slow water just above the bend and was rewarded. 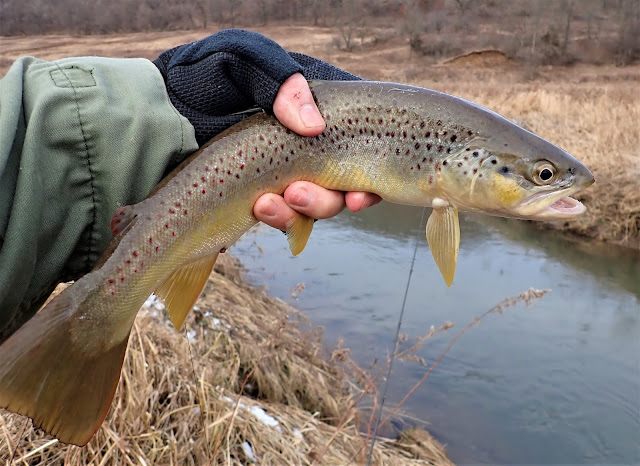 I was still kinda worn out from Saturday and these tall weeds really made it hard sledding.  Typically when I am tired or the fishing is poor I take scenery photos.  I was tired.  I had caught more than Saturday already. 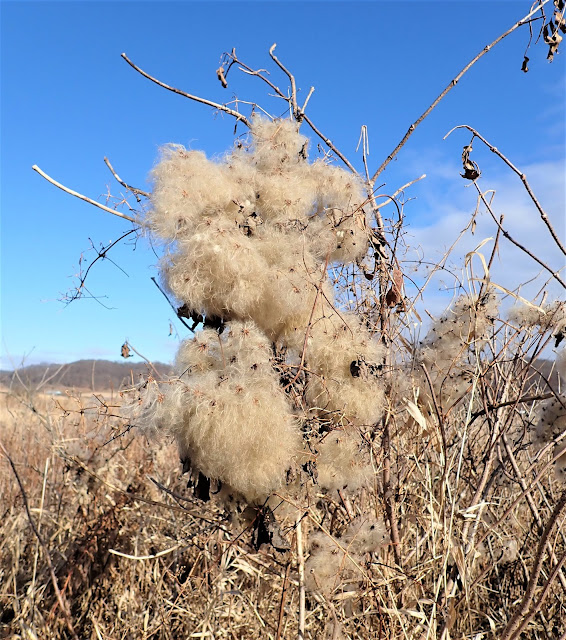 Not sure what this is.  Maybe "Old Man's Beard." 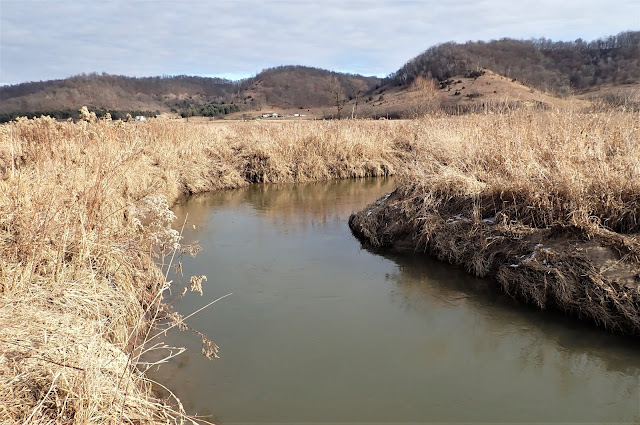 The next bend looked good and I could hear another spring. It fed in at the corner again.   I landed 13 browns in this corner.  Nothing big.  My legs were telling me to take a break. I could see another pasture about 60 yards upstream.

The pasture made me forget about having tired legs. The wind picked up about now.  I was really close to the road.  I could see the farmhouse where I got my new permssion.  There was a field road with ruts right near a hole that looked like it had promise. I thought to myself that this hole was too close to the road and the house to hold anything decent. I never walk by good looking water.

Sorry no photo of this hole. Too good to let someone recognize it from the photo..   I caught a smallish brown near the bottom of the hole.  The banks were slippery and I was a little lazy and tired and fished the hole from up higher on the bank than I really should have been.  I had a medium brown follow and I took it away from it at shore.  I did this on purpose because this hole really looked good and I did not want the little ones to spook a potential monster from the hole like happened in the other two corners.

Had a couple bumps but no hook ups.  I went up to the 90 degree bend again and threw into the slack water on the inside of the bend. I slowed down my retrieve because this hole was deep and it was a little slower than the rest of the stretch. I was still up a little too high on the bank. The edge was greasy and I did not want to end up in the water. My spinner came to the surface and I saw a huge white mouth opening right under my lure. I stopped my retrieve and the giant hook jawed brown stuck his whole head out of the water and it literally looked like it kissed my spinner and dropped it immediately. I was worried it saw me so I crouched down to make less of me visable.  I did not feel the trout touch the spinner so I thought this trout might come back.  I had on a gold panther martin deluxe on with red and black accents.  I took the lure away from a couple other littles on the edge purposely to try to avoid spooking the hole. 20 casts in there and no more hits or follows.

I decided a change was in order.  I crawled downstream 10 yards and slowly got closer to the water. I sat there and tied on a yellow body with red spots with a silver blade.  I opened my can of pop and drank it slowly.  I wanted the big fish to forget about me.  The pop was done and I sat there for about another 10 minutes. I was on the water's edge in the seated postion. If I hooked up on the kisser I wanted to avoid sliding down the greasy bank to net it.

I threw in twice and nobody home. The third cast it happened.  I had a violent hit and my rod bent in half.  I could feel the trout's power and it was big. It ran around the hole but hung close to the bottom.  I gained the upper hand and got it coming to shore. It was still hugging the bottom and I could not see the whole trout. I saw its bright yellow side with loads of spots  I smiled and that smile got slapped off my face when it dove again.

I was being a little too gentle with this fish and decided to end it and muscle it to the surface.  Before I could muscle it I felt the damn trout wrap around something. A tree limb or something.  It was welded to the bottom.  I tried lightening up on the battle so the fish could swim out of the mess.  I could see flashes of its giant side down 6 feet. I could feel it was wrapped on something.  I thought about going into the water but it was too deep.  No swimming on a 38 degree day.

I had a pang of guilt go through me.  If this big head male brown broke off with that panther in its mouth it would surely die. I stood up and tried to get a better angle to free it from the branch. My panther came screaming back at me.  No break off. I was so relieved. I fished my way to the next bridge. I landed 34 brown today.  Most of them were on the small side. When I got back to the vehicle I thought about if I did anything wrong with the kisser??  The fish just wins some of the time I thought.  We will dance again.