It exists on my favorite brook trout stream in rural Crawford County. I have fished this stream since 1962. I had heard there was a new landowner in 1988.  I promptly visited the new owner and asked permission to fish on his waterway.  Al does not fish so I was given permission. 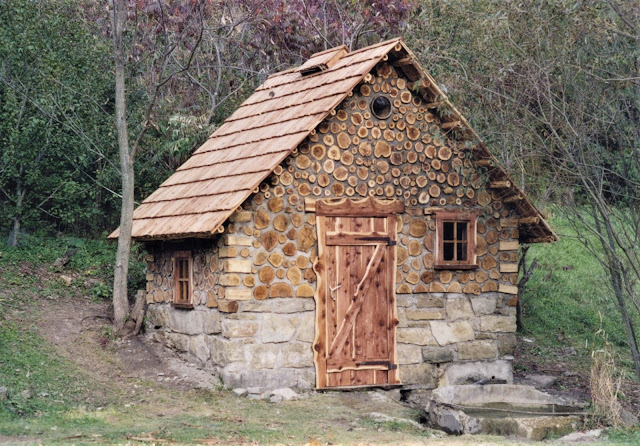 I fished the stretch in 2000 a couple times and noticed a building project going.  I left them in peace and exited the area without checking out the interesting building from afar. My first outing there in 2001 I could see the building was completed. I had to investigate.  At first glance it looks like a building right out of Hans Christian Anderson's Fairy Tales.


The stunning structure was built in the "Cordwood Masonry" style.  The owners and builders of the whimsical structure wish to be identified only with their first names because they are private folks and love their solitude. The creators of this work of art are named Al and Shirley.  Al and Shirley are originally from western Minnesota. The attention to detail is obvious immediately upon first sight.

The Spring House was completed in 2000 by Al and Shirley. It took 2-3 weeks to complete.  The materials took several months to make and to fit.  The base is made from rock from a structure that was on site when Al initially purchased the land.

All of the wood is eastern red cedar.  It was harvested from their property. Even the shakes on the roof were made of that cedar" heart". The heart is center of the cedar trees.  They measured exactly twenty-eight inches by three quarters of an inch and tapered down. Five large cedars were required just for the shakes. The rafters and cordwood walls were all made of that same cedar. 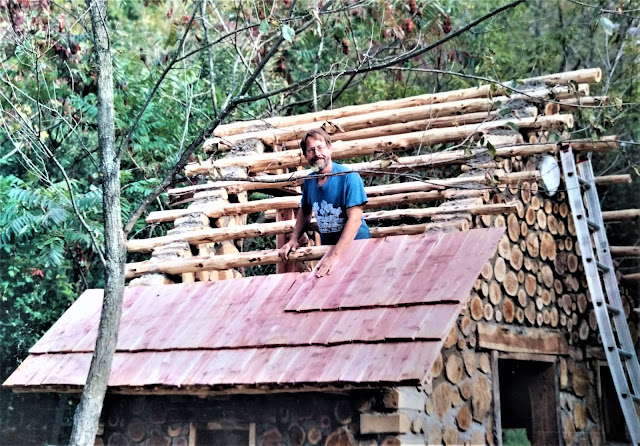 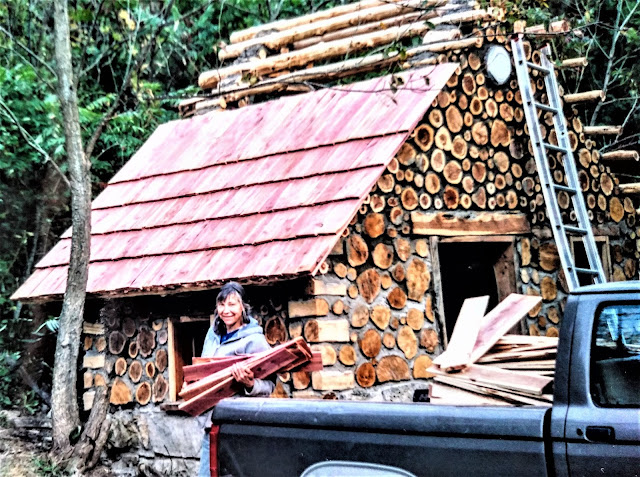 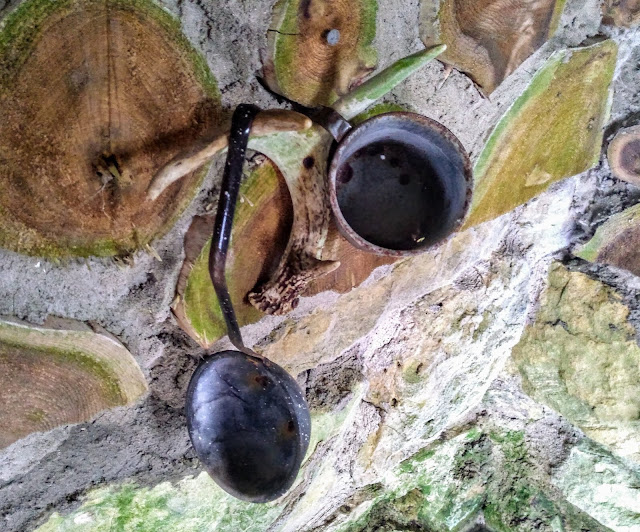 The foundation and cord wood walls required over 10,000 pounds of mortar to complete. The concrete water tank in front was made long ago. It was replaced in 2008 with a handmade cedar heart tank..   The port hole on the peak of the roof is made out of the bottom of a whiskey barrel with Plexiglas in it. Al is a "Cooper." A cooper is a barrel maker. Al has made many whiskey barrels through the years.  The door handle and ladle hook are from deer horns found on the property. The hinges for the door are from an old structure that was on the property when Al purchased the land in 1986. 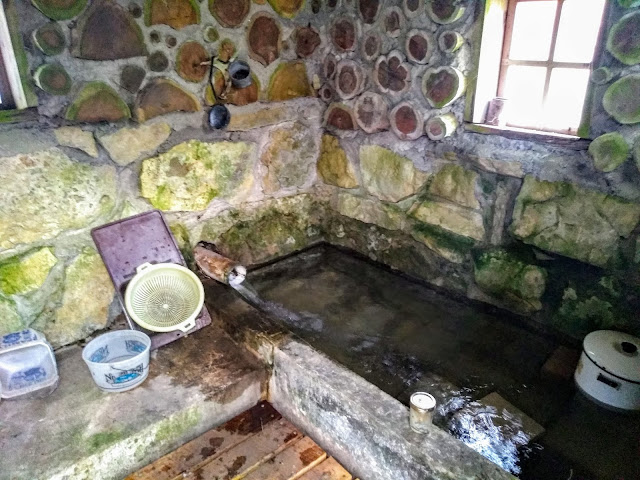 I have continued to fish the property for decades.  During that time I witnessed three other structures appear on the homestead. Al and Shirley bought some adjoining land and a saw mill and barn went up. The saw mill was added in 2004 and the barn was built on an existing foundation in 1990.  The barn was made from the ground up with the same care and precision as the spring house. Prior to that Al procured a house and put it on a foundation already there.

It was obvious the owners had quite a set of skills. A huge garden is on the property.  They grow lots of root type vegetables to store in their root cellar under the house. They also grind their own flour for breads. Their "Pioneer Spirit" shone through.  You could see it from distance even. 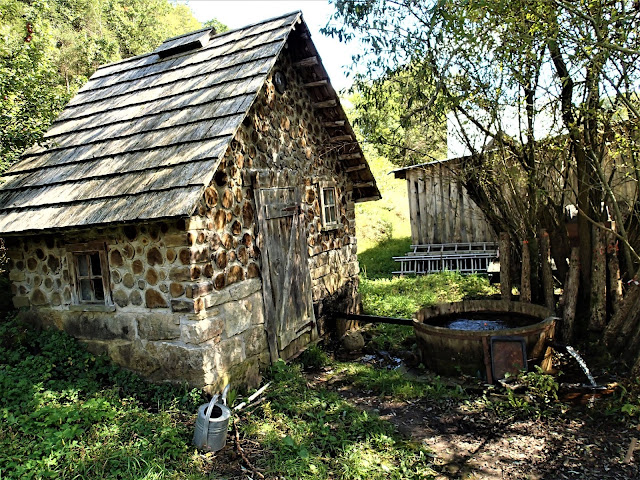 The summer of 2019 I fished the area for the first time in 4-5 years.  My curiosity got the best of me and I had to go look at the spring house close up.  I knocked on the door and Shirley greeted me with a smile. I talked to her for a while and searched out her husband Al on the property and asked both of them if I could take some pictures.  I took a couple photos and said my thanks and left.


I was in the area in early December 2019 so I paid them a visit again.  They told me all of the information above and supplied me with the photo of the structure from 2000.


We talked for quite a while.  The ornate spring house was to keep their only water supply fresh and clean from the elements. They do not have a well.  The spring house has supplied all the water for over thirty years.

One summer there was a drought and the flow in the spring house went down to practically nothing. They had to use another spring on their property for six months until Al moved some rocks and freed the water supply up. 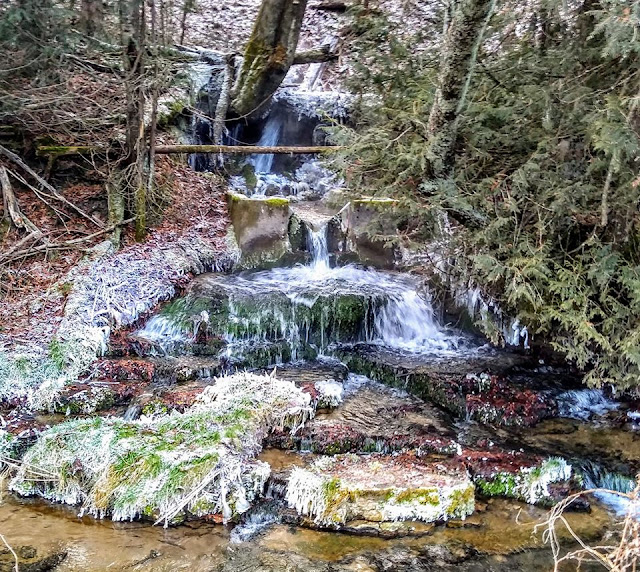 Through the years the spring house has been used for many things.  They milked a cow for a while and the milk was stored there to cool.  They made their own bottled root beer and it was stored in there also. For quite a few years they manufactured maple syrup.  He has an extensive tubing system on his north facing hillside and a collecting tank.  He gave up that in 2018 because of over active squirrels chewing on his tubing constantly.  They are both retired now.  They have a few cattle but no milking. Al still builds things. “Beautiful things.”

We went outside and looked around some.  The spring house had changed a little through the years.  There was a cute little figurine near the front door of the spring house.  It looked like an ornament of some sorts.  It was a ceramic pig.  I asked Shirley where it had came from and she said she had found in on one of her wander abouts.  I asked if she had named it.  I said it was the "Guardian" of the spring house and it should have a name. After a back and forth with Al and Shirley I suggested her name should be "Fifi." They both agreed that was a good name for her. Al added: "Fifi is a good pig. She eats very little and stays fat." 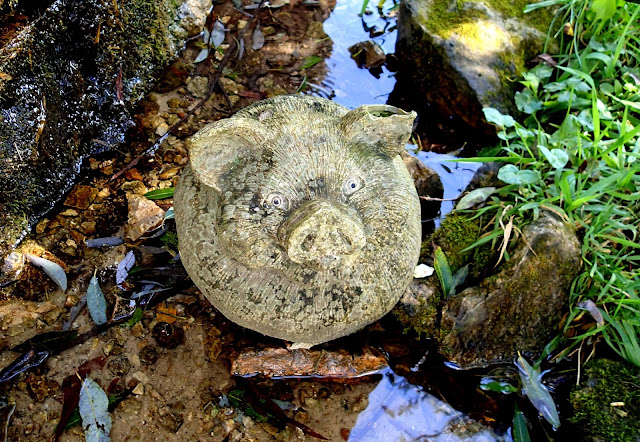 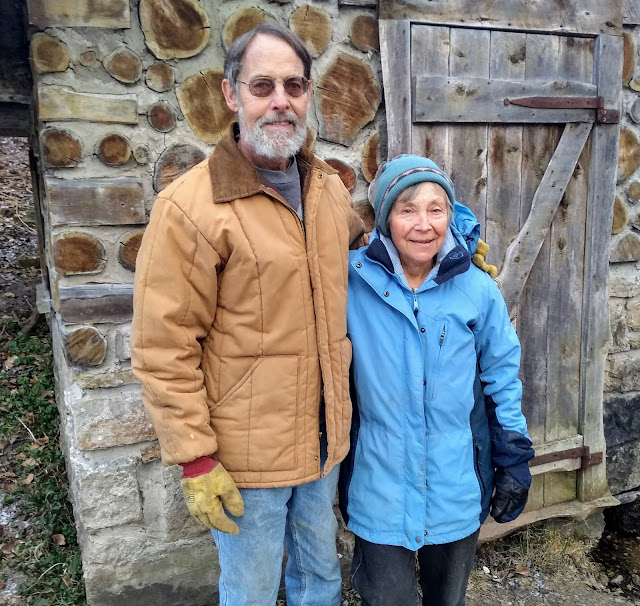