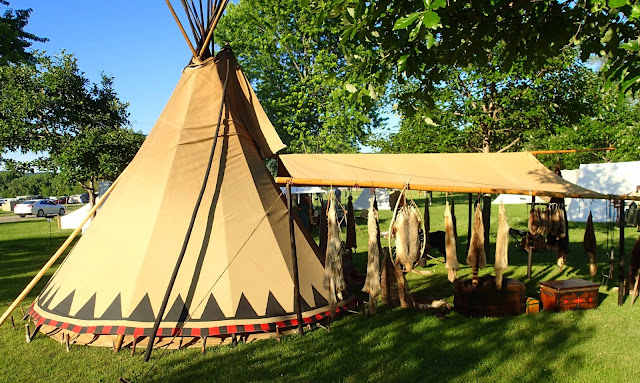 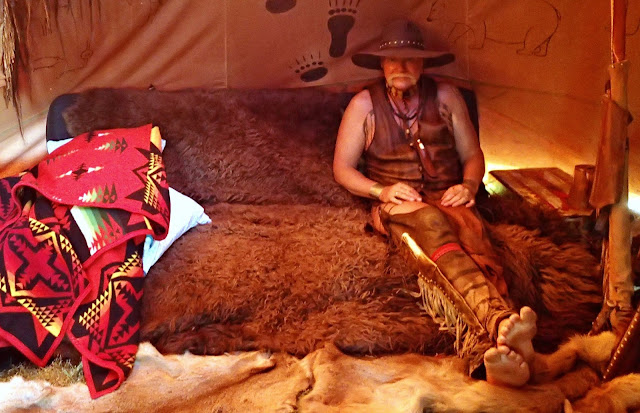 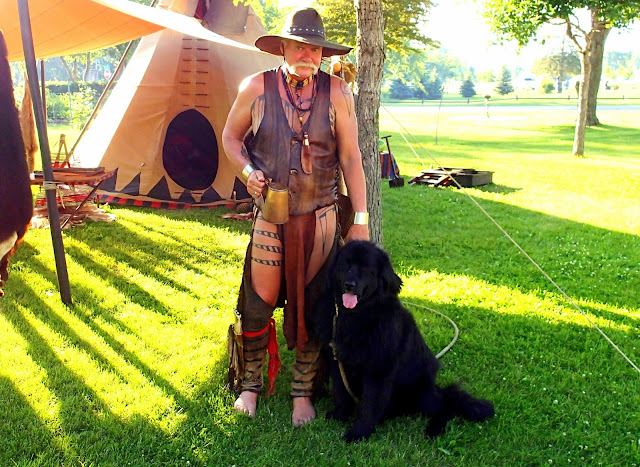 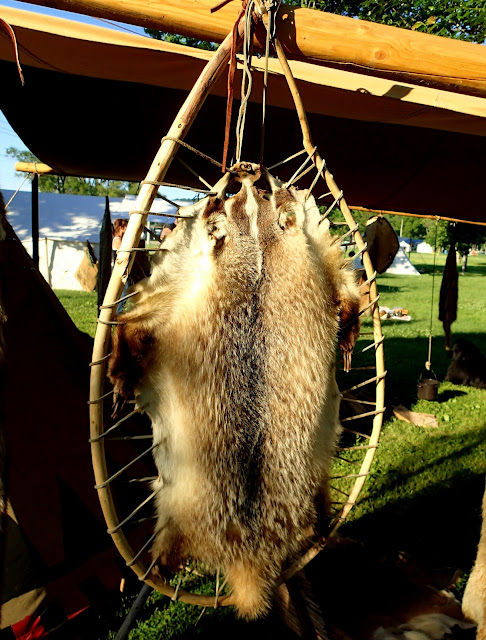 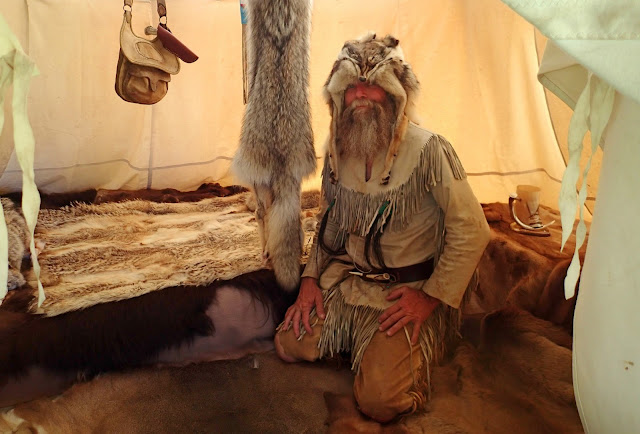 Bob Zuideman from Morrisonville, Illinois was preparing his tepee.  This was Bob's 16th trip to Prairie du Chien for the Rendezvous.  It is the 40th anniversary of the event in Prairie. 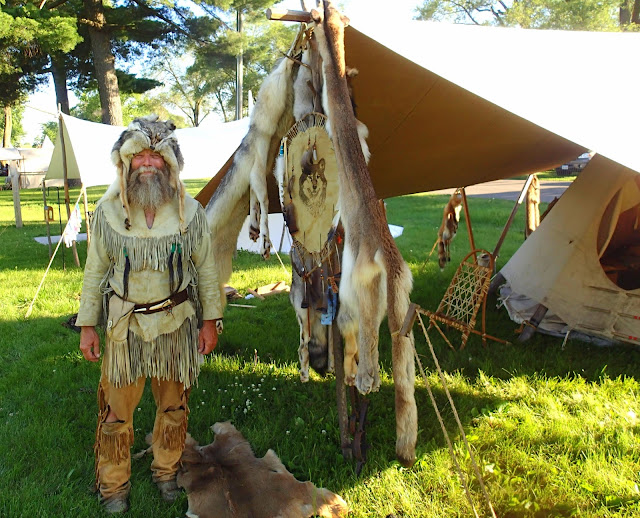 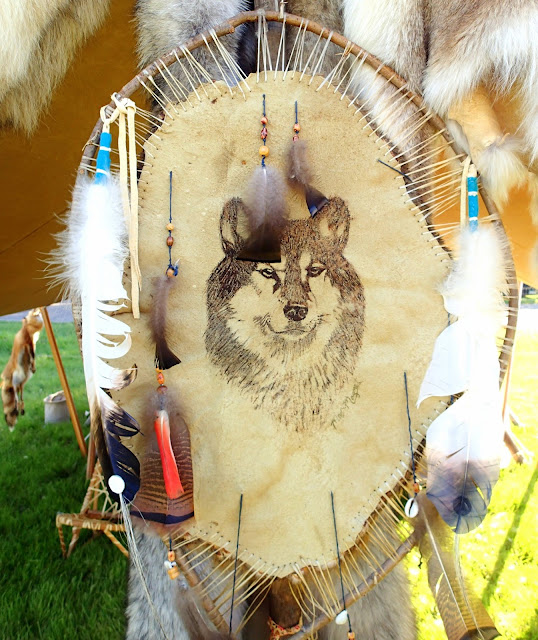 Posted by Len Harris at 9:51 PM No comments: Links to this post

A Photo For All Your Senses 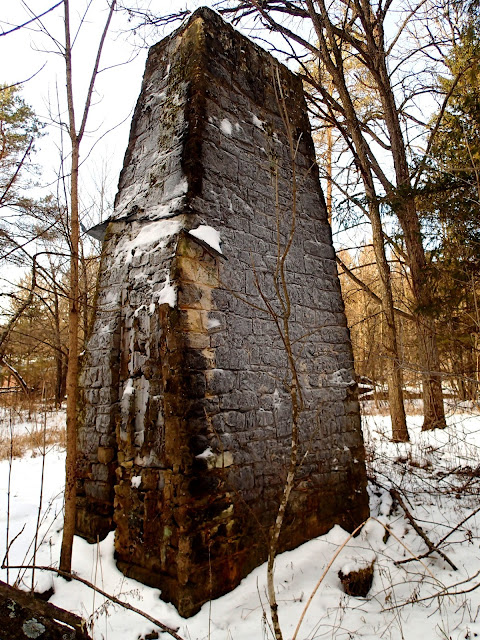 I can feel the cold in this photo and almost touch the texture of the stonework.
Posted by Len Harris at 9:40 AM No comments: Links to this post

My Favorite Five Photos I Have Taken 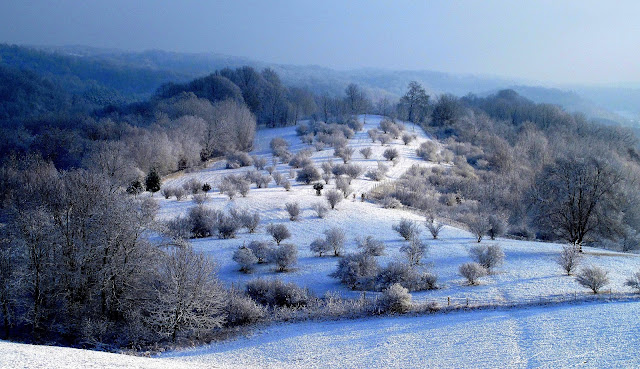 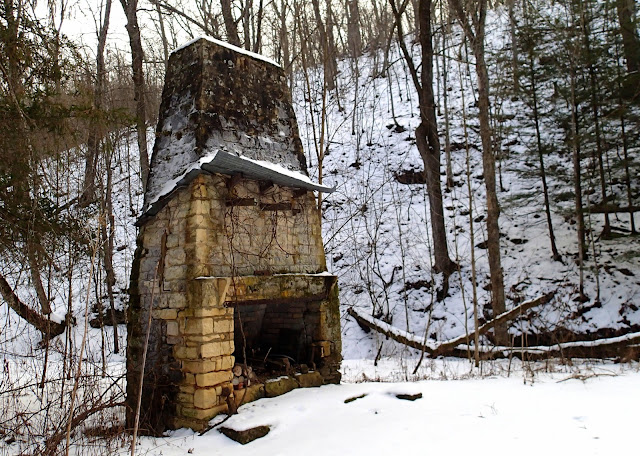 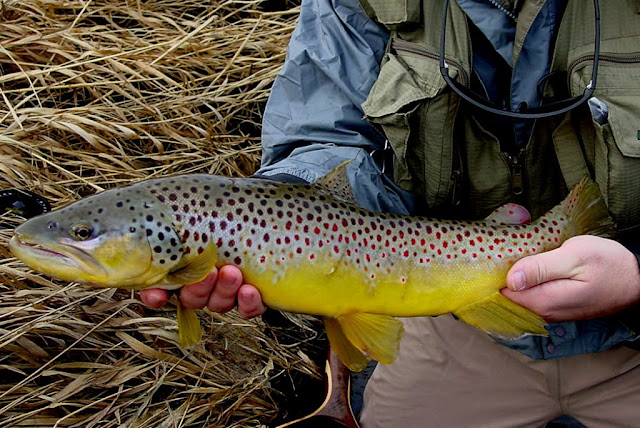 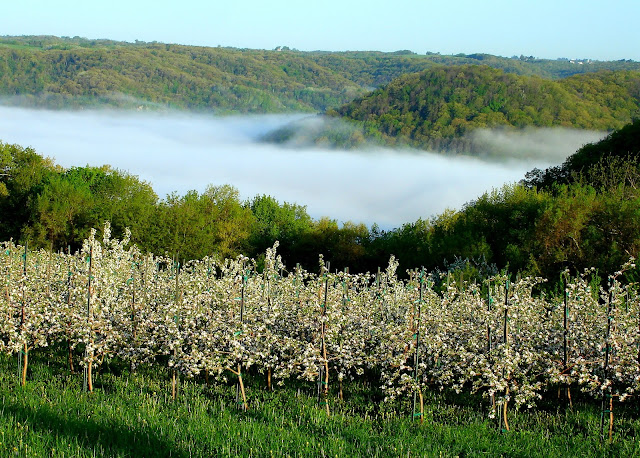 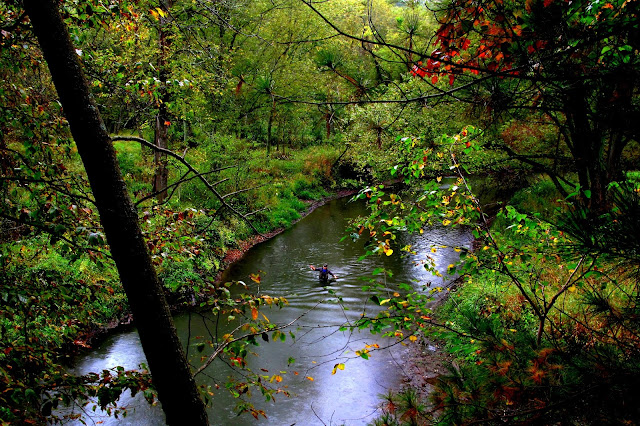 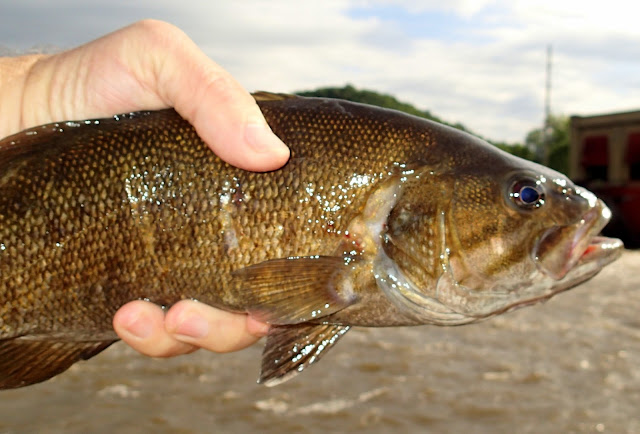 nothing on first 40 casts.  Switch to big stick bait with ratlles and this is the bigger of 2 smallie I caught.

The Story Behind The Photo 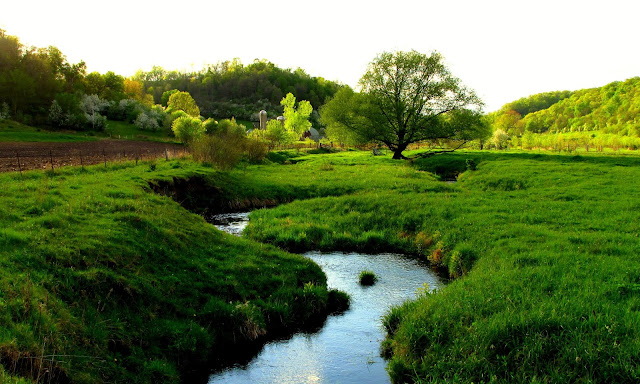 I stopped at the farm house for the fifth time in six years.  I was a little bashful as I exited my vehicle.  Each time I had stopped here over the years the results were the same.  We talked each time for a short time but he was always on task and our interaction was minimal.

I saw the farmer out in the field plowing.  I decided to wait until he was done to talk to him.  It seemed like an eternity waiting for him.  I knew if I walked out in his field and bothered him the answer would be the same as the other years.

I went back to my vehicle and waited with the door open.  During the time I was waiting I had three visitors to my truck.  First was the dog that patrolled the barnyard.  It was a mixed breed dog and was on the big side.  I had met him on my visits in prior years.  His bark was loud and fearsome.  I remembered the last time there and our interactions.  I had almost been brave enough to bend over and pet him.

This time I decided what the heck.  I went down on one knee and coaxed the dog to my side.  It melted immediately and quit barking.  This old farm dog was in need of some attention.  I spent the time petting him waiting for the farmer.  Two cats came to visit and were chased off by the dog.  He wanted me to himself.

I went back to vehicle to sit and the dog jumped into the truck with me before I could close the door.  This was not a little dog and it was just barking its head off at me three minutes prior so I was bashful about shooing it out of my front seat. The farmer must have seen that from the field and decided to investigate.  He pulled up to my vehicle and shut down the tractor.  We knew each other for other visits so we were not strangers.

He said:  "You are back again?"  I smiled and nodded.  He thought I had given up because I had not stopped the year before.  He was really surprised the dog jumped into my vehicle.  He gave the dog a not approving look and it promptly jumped down from my truck.

He asked if I had a question for him?  I asked permission to trout fish on his land.  He had told me no in years past.  We had conversations before and after each visit in the past.  I had always been polite after and before each time.  I kinda expected a no again.

He fired up his tractor and began to drive off without answering me.  He turned and smiled and said yes as he left.  It was a short exchange but it was an affirmative.  I was not waiting for more and I drove downstream and fished.

It was the first time on this stretch and I wanted to give it a good look.  I fished every nook and cranny of the skinny water.  I was really taken aback by the beauty of the stretch. The freshly tilled field had a unique smell and the crab apple trees being in bloom and their wonderful smell added to the experience.  The trout were eager and plentiful. I took the above photo near the end of my outing.  I remember catching eleven trout in the area pictured alone.  The sun was setting and illuminated this stretch. I felt like I was in some movie with all of the smells and sun setting and eager trout.  I stood there and took it all in.

The dog started to bark again.  The farmer was putting the tractor in the barn so I took that as my cue to go speak to him and thank him.  The dog came running up to me like a long lost friend and demanded petting again.  The farmer just rolled his eyes.

I told him about my luck on his stretch.  I thanked him for allowing me on his land.  I wondered what had changed from years past and asked him why he said yes this time?  He said one word and walked away.  He said:  "Dog."  I walked back to my vehicle and pondered what he meant by that.

The next spring I was gearing up at the same stretch and about to go on there again and the farmer pulled up alongside of me. He was very particular on who he allowed on his land and didn't recognize my vehicle and wanted to see who I was.  I introduced myself again and he remembered me.  He told me that I had always been polite the years prior even after he told me no and he liked that.  The final positive that changed his mind and allowed me to go on his land was the fact the dog liked me and the dog was a good judge of character. 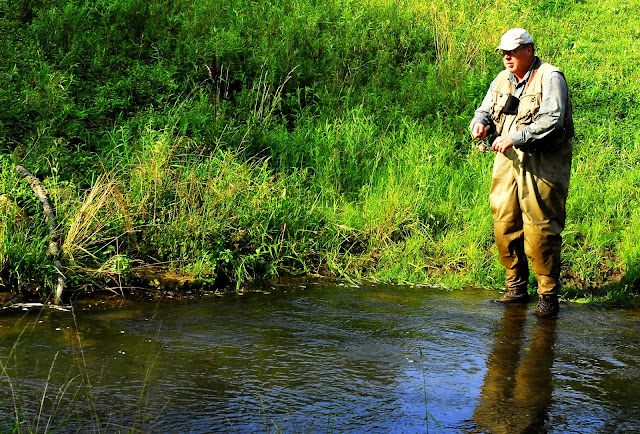 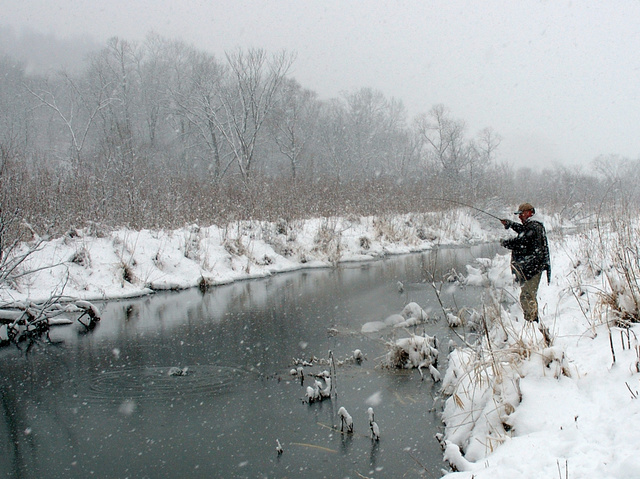 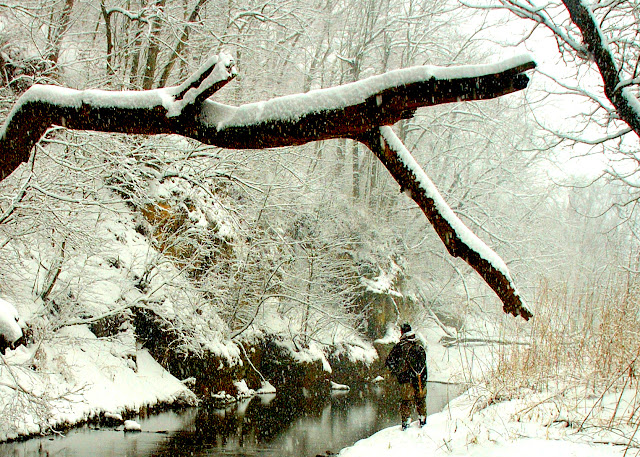 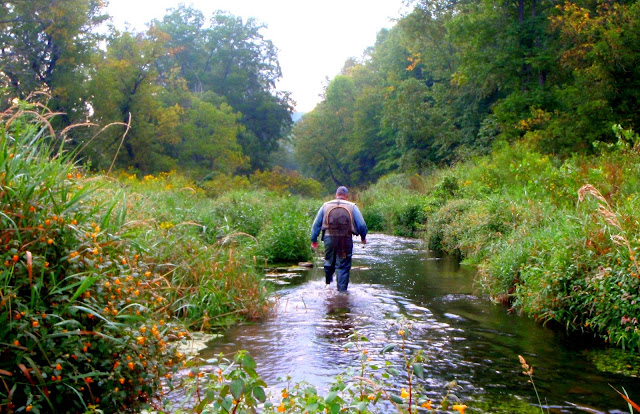 It has been a month since I wet a line for trout.  I believe it will be easier than I thought to walk away.
Posted by Len Harris at 6:37 AM No comments: Links to this post 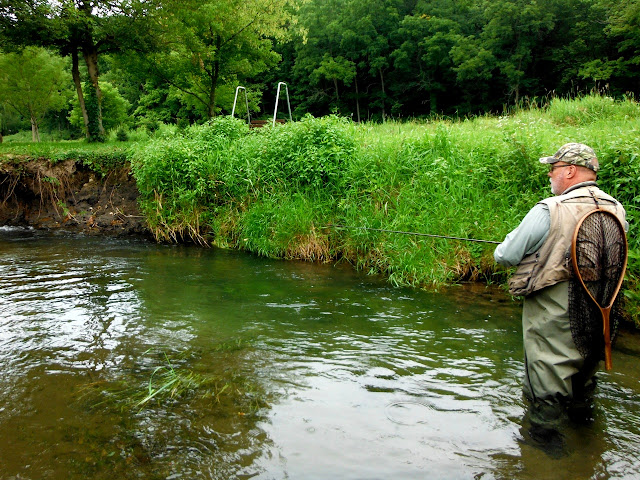 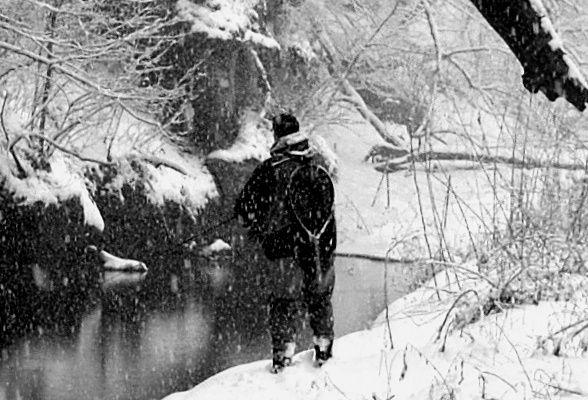 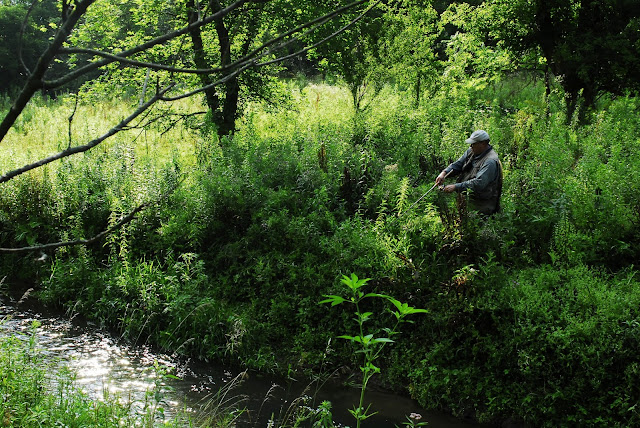 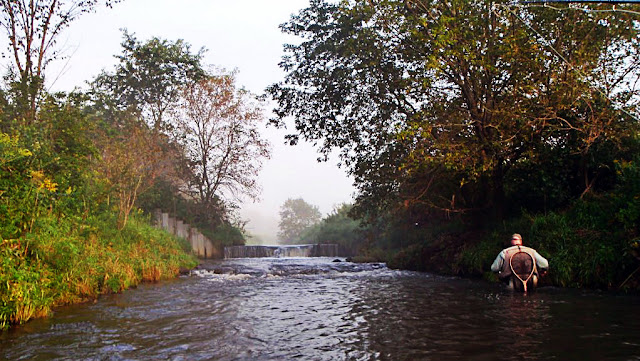 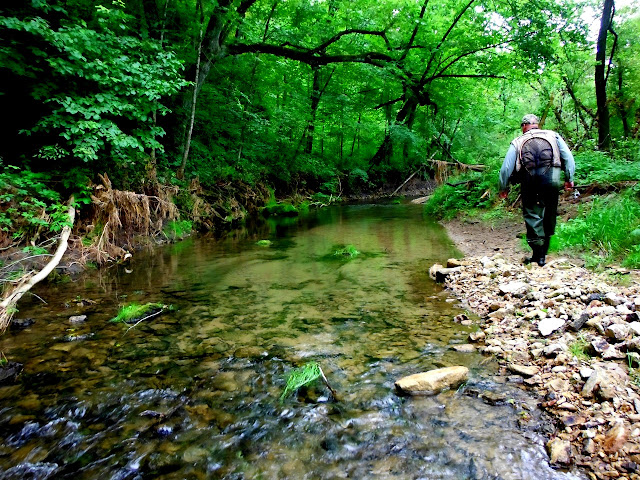 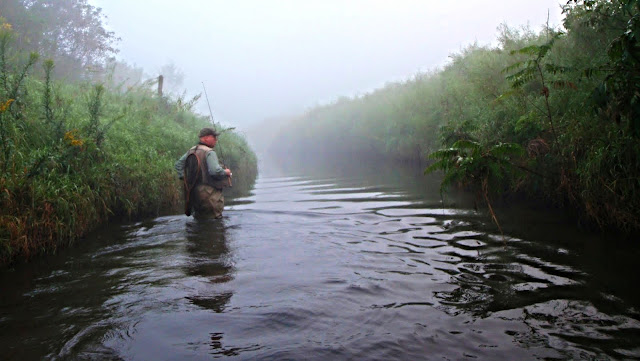 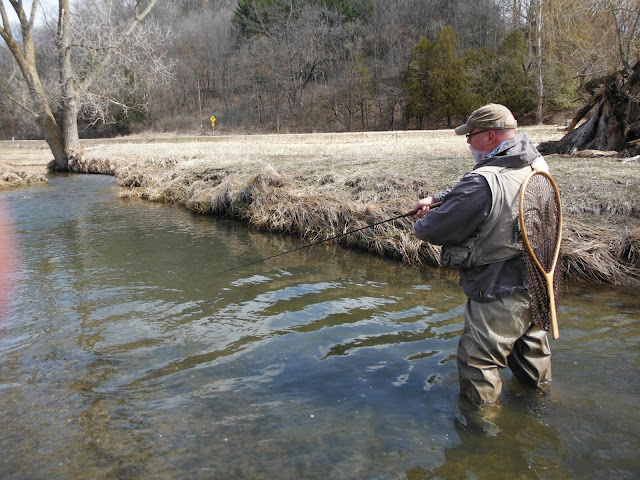 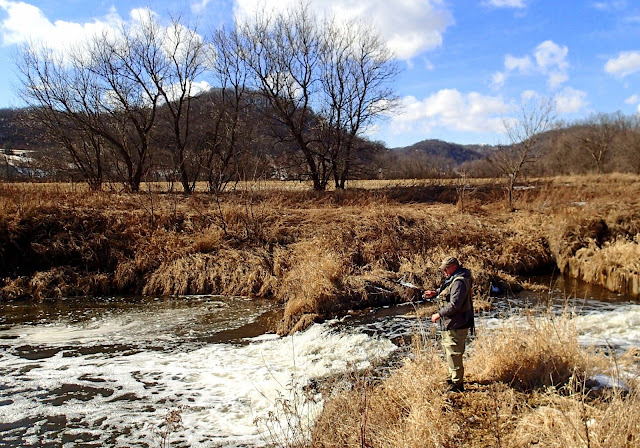 Posted by Len Harris at 3:48 PM 2 comments: Links to this post

For about 5 years you have been hearing the trout management folks of Wisconsin singing their praises every meeting they had.  Their arms were sore from patting themselves on the back and grinning.  Things are about to change.

Just very recently they did surveys and wanted angler input about why folks had left trout fishing.  "They" tallied up the numbers and spun the statistics to suit their final decisions.

I have log books that date back 35 years.  The numbers of trout held steady for many years.  The general size also was steady.  About fifteen years ago I noticed a change in numbers of trout.  This trend continued and three years ago I had my best numbers year ever and my fewest large trout to hand logged for the year.  This is not an anomolly .  More trout mean fewer big trout.  There is only so much food in a stream and the big trout of days past are disappearing at an alarming rate.

Part of the survey was asking why people left trout fishing???  A significant number remarked on the regulations being too cumbersome.  So what did the "Trout Committee" comprised of 80 percent of catch and release only anglers do???

They added "pages" of regulations.  They hid behind a parlor trick of making less classifications of streams and they called this simplifications. So now there are fewer classifications of streams and fewer colors on the county maps. The average trout angler in Wisconsin was totally ignored.  The regulations for the catch and release folks don't change and they are in the minority.  They can still mindlessly release trout no matter the results to the trout population and size overall. A shake-up and new blood needs to be added to this committee of the Conservation Congress.

They made the rules more restrictive and added numerous regulations making the regulations even more complicated and unattractive to the folks that like harvesting trout.  The trout committee is comprised of folks that eat one or two trout a year to make themselves look like "real"  trout anglers so they don't appear to only injure trout for sport alone.

The overall size of trout is down and this is a fact.  The catch and release crowd blame it on over-harvest of large trout by worm and spin anglers.  They should be looking in the mirror because they are the reason for the size decline in the streams.  More trout equal small trout.  There is only so much food for trout to share and more fish mean fewer big trout.

Along with the regulations' "simplifications" they have changed the length of trout you may keep in many streams.  This they did along with an increase in the numbers you may keep.  These streams are the overpopulated streams.  They want to thin the herd with these simplifications. The days of taking a huge trout home to show the folks at home and to brag about will be getting fewer each year.

The catch and release anglers will continue to let everything go and that is their right.  The rest of the majority of trout anglers will leave trout fishing due to the "NOT" wanting to harvest five tiny bony trout.  The thinning of the herd gamble will backfire because the folks they are depending on to do the thinning will leave.  They will migrate to a different kind of fishing that is less restrictive and will allow them to take home a limit of fish that can feed their family without picking through bones.

Ten years from now the fish managers that were patting themselves on the back will be puzzled because they have way too many small fish and there has been a mass exodus of spin and worm anglers that like eating fish.  They will send out another survey and the results will fit the crime.

There will be thousands of trout every mile but they will be stunted skinny little catch and release play things.  A big trout will be 16 inches.  The days of the 20 inch brown trout will be gone. You may see a glimpse of one from time to time when the back patters have a new survey scheduled and they need to up the general size surveyed in a stream and they release some brooders in a stream that has historically been only a catch and release stream for decades to skew the sizes overall. 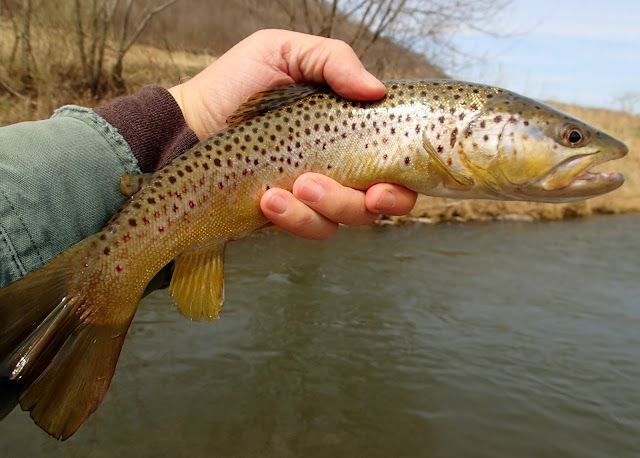 This will be a huge trout in 10 years.  The numbers will skyrocket in managed streams.  The only place you will find a big trout is in non-designated water where the WDNR has not micromanaged.  Welcome to the "Bad Old Days."


Welcome to the Dark Days of Wisconsin Fish Management.  The WDNR is so slow at change and when they do they are historically bad when it comes to getting it right.  They are the reason this will happen.  The one sided Conservation Congress Trout Committee and the WDNR are to blame.

I am seriously contemplating not buying a trout stamp next year.