Smile For The Camera! 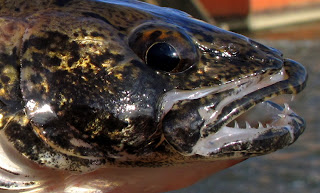 Dorsal region of head and back brown to gray; sides paler, ventral region of head and belly white. Sides and back variously speckled with dusky spots; 4 dark saddles across back, some of which expand horizontally on sides. Eyes silvery in life; a well-developed reflecting layer (tapetum lucidum) causes glowing in dark. Membranes on the spiny dorsal fin with definite horizontal rows of spots, and last few membranes not solid black; second dorsal and caudal fins with dark spots in regular rows; ventral lobe of caudal fin sometimes white edged. Pectoral fins lightly speckled, and with a strong, black blotch at base; pelvic and anal fins clear to lightly speckled. 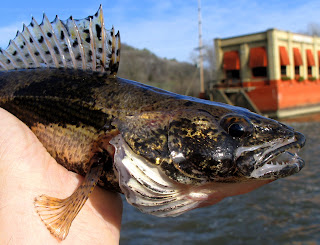 This one was caught today at the dam in Gays Mills on a very large jointed rapala.

Posted by Len Harris at 2:08 PM No comments: Links to this post

Andy is an excellent photographer and writer and even a better "Trout Hunter."

Andy has a featured article in January 2013 American Angler Magazine.

Below is his blog so you can do a little recon before his article comes out.

http://trustlabor.com/adrift/
Posted by Len Harris at 9:27 PM No comments: Links to this post